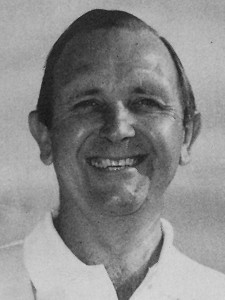 An Austin native, Pryor is a pioneer of water polo in Texas. He was a standout swimmer and all-American water polo player for Tex Robertson’s Longhorn teams from 1948-1950 and produced and directed the famous Aqua Carnivals of the ’50s. After serving in the U.S. Army, he returned to Austin to coach the Austin Aquatic Club. As a genius at marketing, Pryor organized the Texas Open Swimming Championship and helped to establish TAGS. He served 35 years as president of the Working Exes for Texas Swimming – the organization that convinced UT to build the Lee and Joe Jamail Texas Swimming Center. Pryor was long known as the “Voice of the Longhorns” as announcer for all UT sports from 1953-2002 and he served the Austin community for many years as a television producer and popular emcee for charity events and fund raisers.

The recognized “Voice of the Longhorns” for various University of Texas  sports activities and the Longhorn Band for over five decades is silent. Wallace John (Wally Pryor) died March 1, 2014 at the age of 86 years. Wally was an inspiration to so many of Austin’s youth as Coach and Director of the Austin Aquatic Club (Longhorn Aquatics). His production and directing talents resulted in a long career with KTBC Television and the University of Texas. Wally performed opening ceremonies, tributes and promotions for celebrities, dignitaries, award shows, banquets, pageants, Headliners’ Club, the City of Austin, Pennsylvania’s Slippery Rock College and numerous charities and fundraisers.
He was preceded in death by his wife, Euna Faye Johnson Pryor, his father Richard S. (Skinny) Pryor, mother Mary Thompson Pryor, sister Mary Alice Clark, brother Richard (Cactus) Pryor, brother Beverly (Bill) Pryor and brother Arthur Pryor. He is survived by his daughter, Phyllis Dempsey and husband, Michael, grandchildren Jensen, Larsen and Rainey Dempsey (all of Austin), daughter Mary Pryor, grandchildren Kersty and Chase Findlay of Dripping Springs, and sister Harriet Scotka and brother-in-law Luddy Scotka of San Antonio, Texas.
Memorial service will be announced at a later date and will be held at Westlake Hills Presbyterian Church at 7127 Bee Caves Road, Austin, Texas 78746. In lieu of flowers, please send memorials to Darrell K. Royal Research Fund for Alzheimer’s Disease, P. 0. Box 5839, Austin, Texas 76763, phone 866-946-3606, email , or to the charity of your choice.