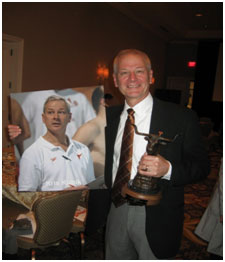 A 2011 inductee into the UT Athletics Men’s Hall of Honor, Kubik leaves the Forty Acres on Aug. 31 as one of the most distinguished and influential coaches in the history of Texas Athletics. The affable Kubik, who served two stints under Reese at Texas (1979-81, 1986-2016), helped lead the Longhorns to 12 NCAA team titles, including back-to-back national titles in 2015 and 2016, in addition to nine NCAA runner-up finishes.