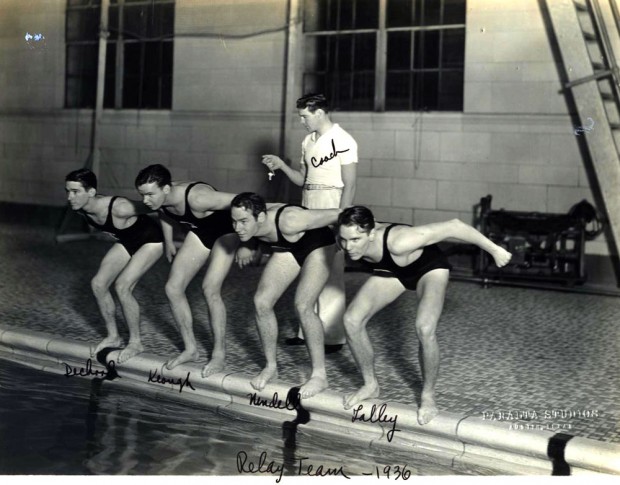 In 1935 The University of Texas had a new swimming coach, Tex Robertson. He was a Sweetwater, Texas, native and ex-University of Michigan swimming star. He sported gold medals from Big Ten Championships and was a member of the victorious Maize and Blue 400-yard relay in the NCAA meet the previous March.

Coach Tex, not much older than the UT swimming team members, was hired initially on some kind of pinch-penny “assistantship” stipend. He made ends meet by living at economy-minded Little Campus Dorm.

Tex took over a UT swimming team that had only a modest program, lacking major publicity, and holding only “minor league” status as a campus sport. Meanwhile, footballers, baseballers, and basketballers were the campus darlings.

Tex had a coaching philosophy copied directly out of the horse’s mouth – that of famed Michigan coach and persistent national winner, Matt Mann. In addition, Tex valued terrific competition. After all, he had been in meets with the best – including stars from Yale, Rutgers, Stanford, Iowa, Harvard and Southern California.

The major problem with UT swimming in 1935 was that the national stars, mostly enrolled in northern and western universities and had been in competitive swimming and diving either in prep schools or in association with active athletic clubs and YMCAs, whereas we had not! To be fair, I should say that some local prep stars were developing in YMCA programs in Houston, Fort Worth, and Tulsa. 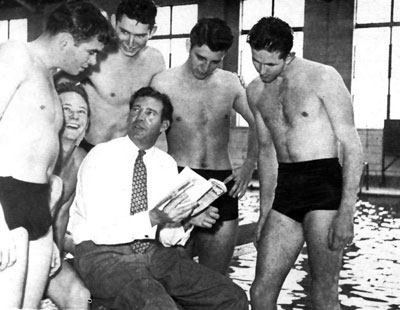 The UT Athletic Department’s famous long-time swimming instructor, Ed Barlow, was skeptical at first. He adopted a wait-and-see attitude until the team, many members of whom were his protégés, began to sparkle. Then he came around in short order.

Important in boosting local interest, Tex scheduled a series of Midwestern dual meets with teams in Oklahoma, Kansas and Missouri. To make the trip, we crowded into two Fords; one was Tex’s 1931 Model A. We won more meets than we lost, with our efforts well publicized in the Daily Texas by the likes of Sports Editor Joe Belden. This first-ever out-of-state trip by a UT swimming team energized the team immensely.

In one year Tex Robertson had, believe it or not, turned the corner and brought UT swimming to campus, state, and ultimately national prominence.

At the start of his second year, Coach Tex’s recruiting paid off with a classy 1936 freshman class headed by such out-of-state prep stars as Olympic backstroke champion Adolph Kiefer and breaststrokers Wally Hoffrichter and Mike Sojka. Lucky for me, as a strictly college-trained breaststroker, Wally and Mike, as freshmen, could not then compete as varsity or my senior year would have become unwired fast.

November, 1969- Letter to The Longhorn Club and Ex-Student Association from Tex:

The WETS organization is barely damp and already the orange-and-white swim scene looks brighter. Old UT swimmers had a fine get-together, the Board of Regents is interested in a new pool, and there’s talk of more attention for Longhorn Swimming. 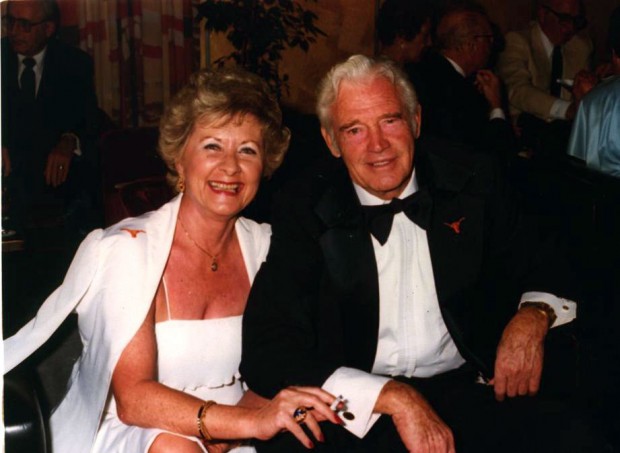 WETS, which stands for Working Exes for Texas Swimming aims to create more interest in all levels of swimming on campus. It is not opposed to the establishment but in support of the University and its athletic program, the Ex Students Association and the Longhorn Club. Membership is open to all UT ex-students and any others interested in Longhorn Swimming past, present or future. A quarterly newsletter of Longhorn Swimming news is planned with the first letter coming out February 4th.

With recent interest and concern for the entire UT Swimming program, the Board of Regents is looking into the possibility of an Olympic-type pool complex to fit the recreational needs of all students. The University of Tennessee setup, with one indoor 50-meter pool next to an outdoor 50-meter pool, has their interest. Location on the “40 acres” is another problem.

The recent efforts to get additional coaching and leadership help for our present Longhorn program has stirred up some waves. Former Coach Tex Robertson, whose teams won 13 conference titles in 13 years during the thirties and forties has led the drive, and comments, “some feel that my recommendations for a winning swim team is an attack on Athletic Director, Darrell Royal. This is far from true as he is my kind of coach with the kind of determination, pride and inspiration needed now for swimming. Money is not Coach Royal’s secret just as it’s not swimming’s greatest need.”

My letter may have suddenly “laid it on the line” after too many years of neglect by the University and us exes. It is intended as information which we should be qualified to offer. To be completely fair to Coach Royal, I would like to add to my letter that we exes only guaranteed to furnish the $6,000 per year for an additional coach for five years. I stand by my letter with nothing intended between the lines and will be glad to send any ex a copy upon request. I know it is hard for many to understand why we care or what we are going to get out of it. But if we get the message to the people at our great university, the finest folks I know (all of them), they will do what it takes.

Coach Hank Chapman furnished us a 1969-70 swimming schedule. The boys are working harder than ever and it would mean a great deal to them if you attended some of these meets and let them know it.

We will need dues or contributions to keep the newsletters coming and promote our projects. $5 has been set for the 1969-70 year. Whether you send any money or not please fill out the card and return it.

The February WETS newsletter is to include a short blurb run down of UT swimmers and divers along with where they are not the first four years (1932-1935) of Southwest Conference Swimming. Dr. Shorty Alderson coach of those teams has been asked to put this together so be ready for a book-length letter.